I just wanted to simply to share 10 pictures from my Singapore Airlines business class experience between Singapore to Seattle, the Emerald City.

I am not really a full trip report kind of person (I leave this to experts like milelion.com, mainlymiles.com etc). But I can’t help myself so I am just going to share 10 photos. This is given how excited I was about this direct flight. Why ?

SQ28 non stop flight to Seattle. The flight I have been waiting 20 years for

For the longest time, I have been waiting for a direct non stop flight from Singapore to Seattle. The “longest time” being since more than 20 years ago when I took the Northwest airline (remember them ?) from Singapore to Seattle through a stop over at Tokyo Narita airport. It wasn’t my first trip to USA (that was Chicago) but it was my first trip to the Northwest of USA. Seattle is a beautiful city. One of the best in America. You should visit it one day if you haven’t.

Since then, I have tried Delta, United and a host of other airlines but I have never had a direct flight to Seattle (because there are none at all !). I did tried Singapore to Los Angeles through SQ on a A380 (and then a short uncomfortable domestic flight from LA to Seattle) and most recently, I have been flying via a stop over at Taipei through EVA Airlines (BR25 and BR26).

SQ28 departs Singapore Changi Airport at 9.25am in the morning and is scheduled to arrive at Seattle-Tacoma International Airport on the same day at 9.25am (US Pacific time). That means you actually arrived in the same calendar day in the morning, giving you a full day of work ahead (that is if don’t have jet lag and can sleep on the plane peacefully. Ha). The flight itself takes about 14 hours. 14 long hours on a plane.

The return flight SQ27 (which I will be taking too on my way back home) leaves Seattle at 9am (California time) and then arrives Singapore at 5:40pm (a calendar day later in the afternoon). That flight is even longer at 16 hours and 40 mins !

Seattle is the fourth US destination after Los Angeles, New York (Newark) and San Francisco to be served non-stop from Singapore. One day I must try all the rest of these non stop flights too. My last non stop flight to USA was on a “now retired” Singapore to LA flight many years ago (By October 2012, SQ announced the termination of its ultra-long haul routes to New York and Los Angeles, retiring its fleet of five A340-500s to Airbus).

The plane Singapore Airlines uses for Singapore to Seattle is the Airbus A350-900 aircraft, which is fitted with 42 Business Class, 24 Premium Economy Class and 187 Economy Class seats. There are no First Class seats or the latest Suites for this plane.

This is also not the ULR variant as the new route already falls well within the range of the standard A350.

Traveller Tip: Rows 11 and 19 have significantly more legroom so people try to grab these rows.

A photo to explain.

For this flight from Singapore to Seattle, I wanted to able to try out Row 19 or even Row 11, which have significantly more legroom. I was quite lucky able to grab the two middle seats in Row 19 when I booked the tickets, probably due to the poor demand for travel during this period of time.

At the time of booking, Row 11 in the forward cabin was not available. That is expected as Row 11 was reserved for PPS members. Me no PPS member leh. However, Row 11 will be opened for non PPS members 48 hours before flight.

So 48 hours before the flight, I checked. And only one seat for row 11 (11F) was available. I needed two. Looks like at least three PPS member will be in the flight 😉

I still continue to check every couple of hours to see if I can be lucky. And indeed, luckily for me and my partner, about 20 hours before the flight, I checked and 11D was suddenly available. And 11F was still available too. With the reflex of a young man, this old man rushed and grabbed both seats. Super quick time.

(On the flight, I can see clearly that the 11A and 11K must be PPS and could even be PPS solitaire from the extremely respectful and good service given to them. Me, just Gold Elite… still very good but can feel the difference lah. Ha…..).

And so off I go for my SQ28 non stop flight in Row 11. Hope it is a good choice for I needed a good sleep.

The leg room in row 11 is much better than the rest of the rows. I can fully stretch my long legs and the foot rest is wider than the normal business class seats.

One after take off and one about two hours before landing. You can also request for other food during the flight itself.

No “Book the Cook” for me this trip. Instead I just selected off the inflight meals. The first main course was the Teochew Style Braised Soya Duck which was EXCELLENT.

One weird habit of mine is to see which airlines serve the best “comfort food” on these long cross Pacific Ocean flights. For Eva Air, it was good. For this trip, I asked for fish ball noodles. It was hot and nice and very shiok on the stomach (especially after short nap).

Finally I did a direct flight to Seattle in 2020

This is after my first ever flight to Seattle more than twenty years ago. On a Northwest airline flight. Oh my god.

Finally a direct flight from Singapore to Seattle at long last. And I did this on the great Singapore Airlines business class and enjoyed the excellent as usual SQ service. Grateful in my heart. Grateful for the luck to do so. 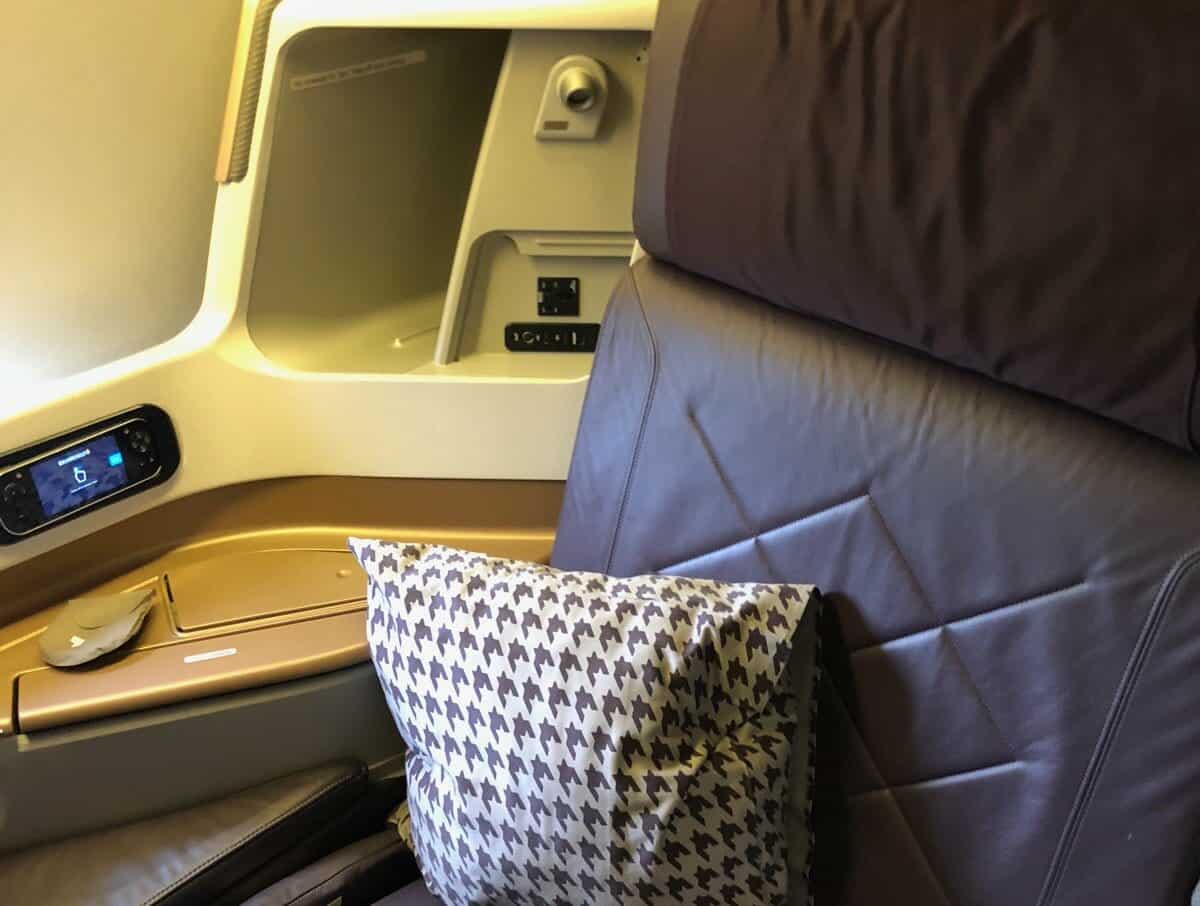 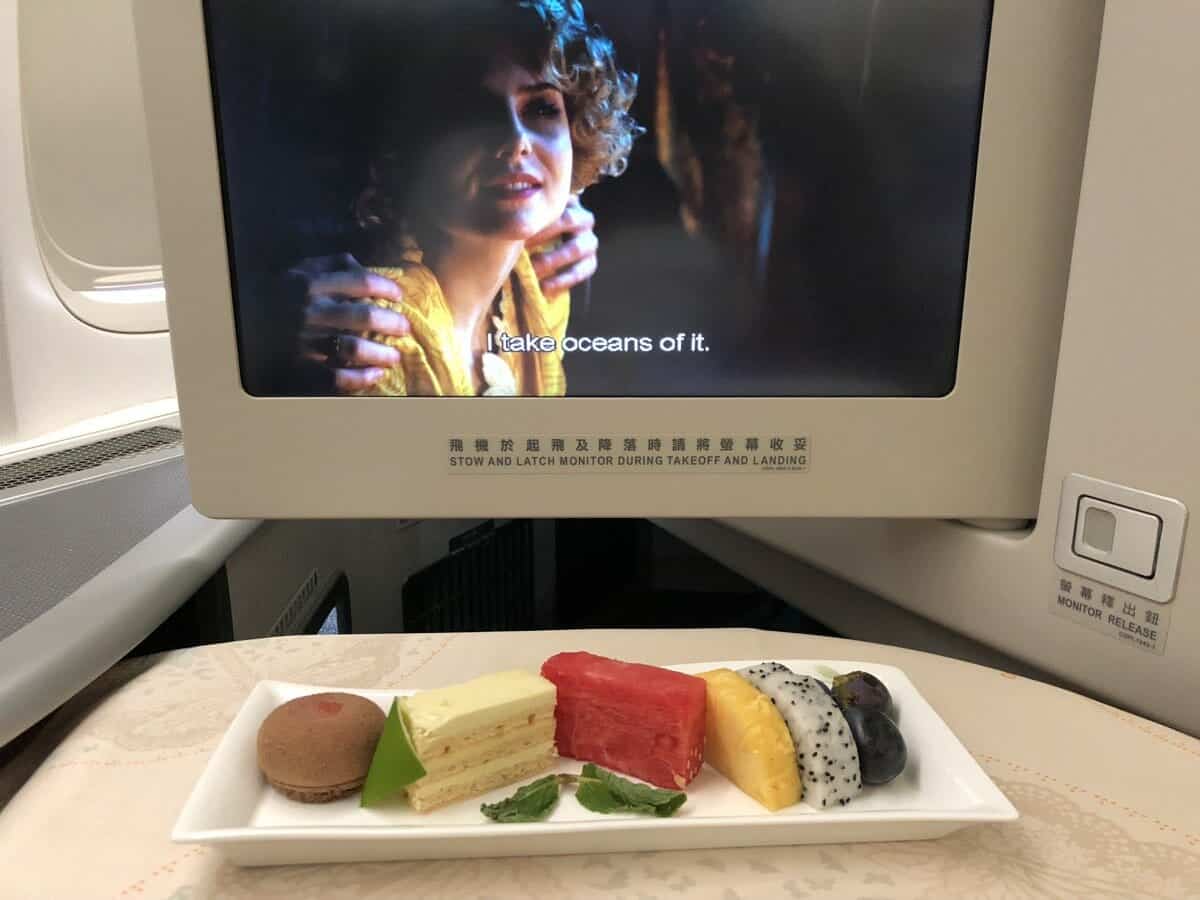