One of the highlights of my trip to the East Coast of United States. To visit the Niagara Falls. We signed up with a local Chinese travel agency who took us there. The journey was pretty long and the hotel is not too bad too. As a whole, I totally enjoyed the trip to see Niagara Falls.

Terrapin Point, Horseshoe Falls: The Horseshoe Falls is considered to be the most impressive of the three falls that make up Niagara Falls. Approximately 90% of the water of the Niagara River flows over Horseshoe (Canadian) Falls, while the other 10% flows over the American Falls.

The tour started from Goat Island.

Goat Island is a small uninhabited island in western New York in the United States. It is located in the middle of Niagara Falls on the Niagara River, between Bridal Veil Falls and Horseshoe Falls. Just upstream from the Falls’ current location, Goat Island splits the course of the Niagara River, resulting in the separation of the Canadian Horseshoe Falls (where we are now) to the west from the American (where we are going to).

A beautiful rainbow greeted us.

On the foreground is the Terrapin Point. Unfortunately Terrapin Point is closed so we could not get really close to Horseshoe Falls (just like Maid of the Mist).

We then moved on to Goat Island

We are still at Goat Island but now looking at American Falls. It is much closer as the viewing point is open (unlike the Horseshoe Falls). So we are able to get much closer to Niagara Falls.

The building at the back is the Observation Point on the other side of the American Falls.

You can also choose to go down (from Goat Island) to the bottom of the falls to get really really wet ! 🙂

Bridal Veil Falls. The smallest of the 3 falls. The Horseshoe Falls is in the background.

We then go up to the Observation Tower:

This view of American’s Fall is taken from the Observation Tower at Prospect Point. The Tower’s observation deck extends over the Niagara Gorge wall to provide spectacular views. Take the elevator to the top and you’ll stand far above the gorge, gazing down at the full drop of the churning cascade. Also from the lower landing of the elevator, you can board the Maid of the Mist boat ride. At the rear of this picture is the American’s Fall.

Explanation of the 5 great lakes. Lake Superior. Lake Huron. Lake Michigan. And finally Lake Erie which leads to Lake Ontario. The Great Lakes are a group of five large lakes in North America on or near the Canada-United States border. They are the largest group of fresh water lakes on Earth.

An American Flag at the location: 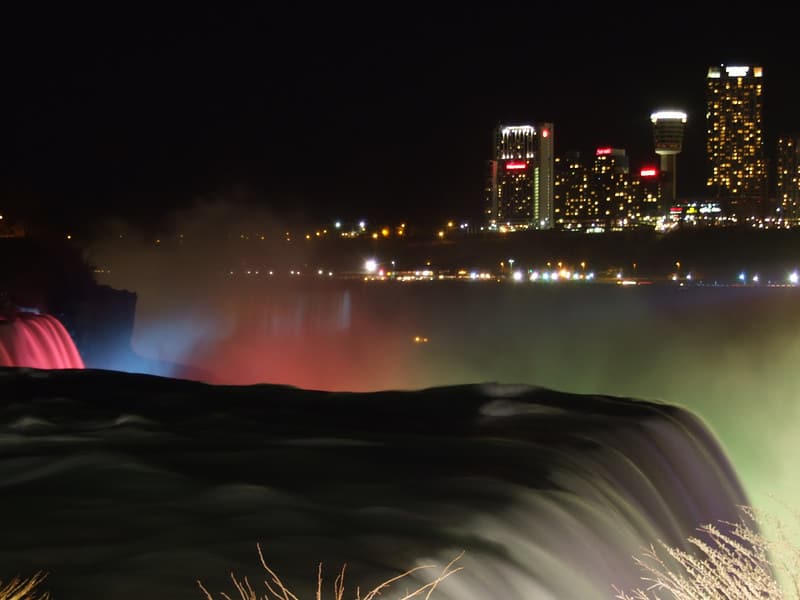