APC Backup Battery UPS. It is actually very important to protect your computer gadgets from a shock from a sudden loss of power. Recently Singapore has seen some really crazy thunder storms where the lightning are striking the buildings. Very scary… my flat even underwent one power trip during one of the thunder storm. First time ever in ten years.

Hence, I wanted to protect my NAS badly. I have this fear that the hard disk will crash or the RAID volume will be corrupted during one of these more and more frequent thunder storm.

There are two kinds of backup UPS.

The first type just gives you enough battery power for you to shut down the NAS YOURSELF. For example, if the power trips, the backup battery kicks in and protects your NAS for 30 mins to run on its battery. Then within that 30 minutes, you have to shut down the NAS yourself. You have to be at home (how would you know the power is out if you are not at home :p)….

The 2nd type (the BR series of APC) comes with personal edition software, which means it allows you to setup the shut down sequence for one equipment. So for example, the Synology DS1511+ can recognize the existence of the UPS and knows how to react when the UPS kick it. It will gracefully shut down.

Went to the store and found the 2nd type to be quite expensive. About $300 to $400… I ended up with a cheap APC BACK-UPS ES 500VA 230V FOR ASE. It is just the first type. Enough to last for a while for me to shut down the NAS myself. Maybe in the future, I can find more cash to buy a more expensive one 🙂

It has to be plugged into the main power and not to another surge protector or extension cord. So plan carefully. I just use one of the power sockets to protect the NAS. I am not using the other 2. 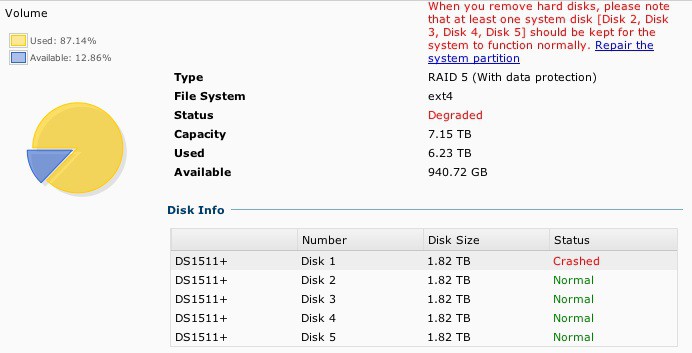